Disaster in May: The Tsunami That Came Without Warning (The Great Chilean Earthquake and Tsunami) 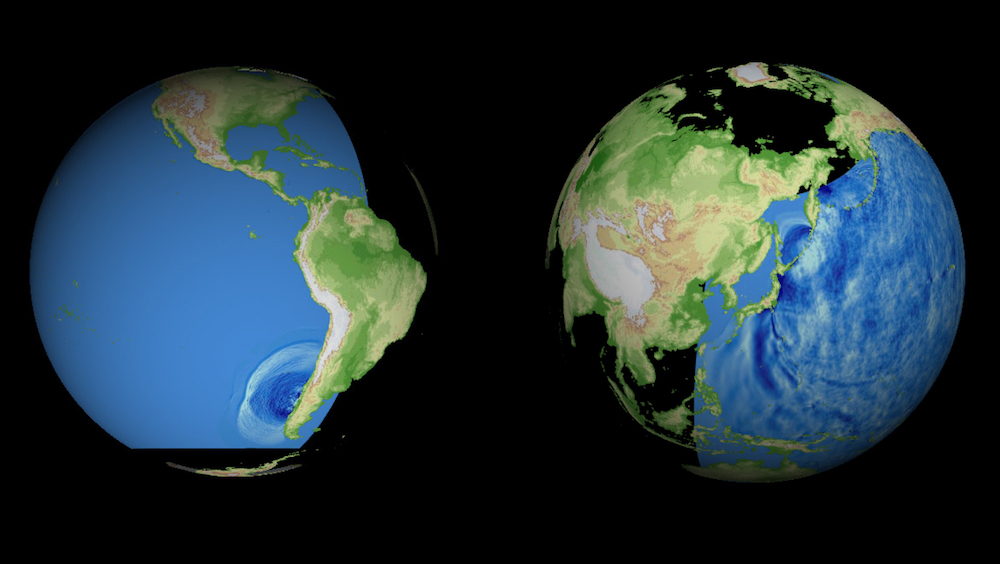 Did you know that there was a case where a tsunami struck suddenly and without warning?  A tsunami caused by the Great Chilean earthquake in South America on May 23, 1960, traveled northward across the Pacific Ocean for almost a day, causing immense damage to Japan, leaving 142 people dead or missing, mainly in the Tohoku region.
The epicenter of the Chilean earthquake occurred off the southwest coast of Chile in the Chilean Trench, where the Nazca Plate is subducted under the South American Plate. It was the largest earthquake ever recorded, with a moment magnitude of 9.5, and was directly preceded by five to six earthquakes that had magnitudes ranging from 7 to 7.5. The tsunami hit the Chilean coast 15 minutes after the quake, and traveled all across the Pacific Ocean, reaching Hawaii after 15 hours, then Japan 23 hours later.
Although Chile and Japan are about 17,500 km apart, the tsunami traveled across the Pacific Ocean at an average speed of 777 km/h, the speed of a jet plane, reaching Japan in less than a day. It hit a wide range of coastal areas, from Hokkaido to Sanriku, Kishu, Shikoku, Kyushu, and Okinawa. In the Sanriku region, the tsunami reached heights of up to 6.3 meters and caused extensive damage, leaving 142 people dead or missing, 855 people injured, and 40,000 houses completely or partially destroyed.
At the time, there was no system to measure or monitor earthquakes originating in faraway places, so a tsunami warning was slow being issued. In some areas where people were on the beach early in the morning for fishing, some people’s deep familiarity with the ocean altered them to the fact that something was wrong leading them to evacuate, saving their own lives. On the other hand, many people in the part of the bay further inland, which had not been easily affected by the local tsunamis, did not know the meaning of the sirens calling for evacuation and delayed their actions, resulting in many casualties. Furthermore, due to the fact that that a tsunami is a series of waves occurring over an extended period of time, some people went to the beach to collect seafood when the tide receded only to be caught by a fresh incoming wave.
The tsunami damage caused by this distant earthquake led to the formation of an organization by United Nations to share information on earthquakes and tsunamis with Pacific Nations.
Currently, the Japan Meteorological Agency (JMA) Distant Earthquake Information to the public within about 30 minutes of an earthquake occurring. Its content includes the date, time, epicenter, and magnitude of the earthquake, as well as areas predicted to be impacted by any resulting tsunami in Japan or other countries.
(Image source: Reproduction of the Chilean earthquake tsunami by numerical analysis 「Report of the Expert Advisory Committee on lessons learned from earthquake and tsunami disasters」 Government, Disaster Management Bureau Government of Japan    Right: Image created 2 hours after the formation of the tsunami   Left: Image showing the progress of the tsunami after 24 hours, created from image 1 and 2 from the report)